Author of the Project 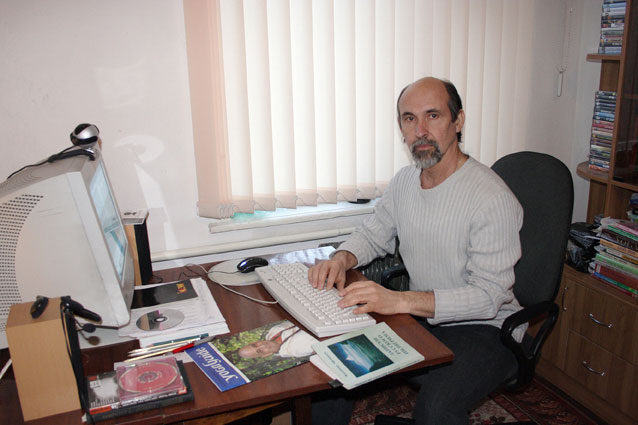 Vladimir P. Afanasyev, Ph.D. in Psychology, Yoga and Oriental mystic traditions researcher, author, translator and musician. He has been investigating the spiritual culture of India and humanist values, in general, for over fifty years. At the age of thirteen he was initiated into Yoga by his father, Professor of English Philology, who studied yoga at the Bombay Yoga Institute in 1963.

In 1971 Mr. Afanasyev moved to Krasnodar, Russia where he met an old Russian Theosophist, Arcady Ivanovich Malakhov (Korsunovsky), who was the owner of a large library of pre-revolutionary and emigrant (imported) editions of Theosophy, Occultism, Anthroposophy, Agni Yoga (Living Ethics), Yoga, works by Jiddu Krishnamurti, Swami Vivekananda, Swami Abhedananda, Sri Aurobindo and other thinkers and philosophers of the East and the West. Having gotten access to the library and archive he began an advanced study of this great source of esoteric knowledge.

In 1988 Mr. Afanasyev paid a private visit to Prashanthi Nilayam (Sri Sathya Sai Baba’s ashram, India) where he was singled out for an interview with Sri Sathya Sai Baba. He went on a many-day pilgrimage to holy places, ashrams and temples of Southern India. He met Svetoslav Roerich, a famous Russian painter, in his Bangalore residence and later on became acquainted with his wife, Devika Rani Roerich, with whom Mr. Afanasyev established amicable relationships.

In 1989 after returning from Denmark, where he stayed by invitation, along with his wife Nelly, at Swami Narayanananda’s Ashram (Gylling), Mr. Afanasyev accepted the offer to head the Yoga Department under the jurisdiction of Krasnodar Regional Centre for Spiritual Culture of the Soviet Fund of Charity and Health and he later conducted practical yoga classes.

At the same time, he participated actively in the Roerich movement, “Peace through Culture”, exploring the artistic legacy of Nicholas Roerich and his family. Mr. Afanasyev spoke at different conferences both local and international.

In 1990, Vladimir Afanasyev published his Russian translation of The Secrets of Prana, Pranayama and Yoga-Asanas by Swami Narayanananda that became the first book by this revered Yogi to be published in Russia.

In 1991, he contacted Swami Jyotirmayananda (Yoga Research Foundation, Miami, U.S.A.). Their ties strengthened over the years and have grown to be a spiritual and creative union between a disciple and Guru.

In 1992, during Vladimir Afanasyev’s second trip to India, Providence led him to discover the Siddha Yoga spiritual tradition (Nityananda—Muktananda—Gurumayi Chidvilasananda). Later on, due to his active involvement and with the personal blessings of Sri Gurumayi, the first ever Siddha Yoga Center in Russia opened in Krasnodar, Russia, and it still functions today.

In 1994, in the course of a private interview, Sathya Sai Baba gave Mr. Afanasyev his blessing for “serious work”.

In April 2000, Swami Jyotirmayananda and Swami Lalitananda (Vice-President at Yoga Research Foundation) certified him as a Yoga Teacher and blessed him “to teach Yoga in all its aspects — Hatha Yoga Exercises, Meditation and Philosophy”, and also awarded him with the title of Yoga-Ratna (Jewel of Yoga).

In 2000, The Notes of a Russian Pilgrim by Mr. Afanasyev was published in Saint-Petersburg. It offers a story of the divine life of Bhagawan Sri Sathya Sai Baba. The book was the first work about Sai Baba created by a Russian author.

In 2008 in Krasnodar, Mr. Afanasyev published his Russian translation of The Art of Positive Thinking by Swami Jyotirmayananda.

In 2011, Vladimir Afanasyev’s monograph Light Incorruptible: the Principles and the Methods of Raja Yoga (Classical Yoga in Systematic Exposition) was published by Kuban State University, Krasnodar, Russia. The monograph offers an analysis of the basic yogic text of the Yoga-Sutra by Sage Patanjali who compiled the ancient Indian spiritual tradition of Raja Yoga in a consistent aphoristic form. In 2014, this book, under the title Yoga Sutras of Patanjali. Abridged Practical Commentary, was published by Amrita-Rus Publishing House in Moscow. Later on, the same Publishing House published Mr. Afanasyev’s books Hatha Yoga. Theory and Practice. Vol. 1 (2015) and The Art of Self-Realization. Yoga and Vedanta in the Teachings of Swami Jyotirmayananda (2017) and also reissued the Russian translation of The Art of Positive Thinking (2015).

Vladimir Afanasyev holds a degree certificate (#00-92) in recreational gymnastics issued by the Ministry of Education of the Russian Federation, Institute for Yoga and Esoteric Sciences (Non-State Educational Organization), Kaliningrad, Russia.

He has studied Yoga in India and Europe and adheres to an integral approach to yogic practice as the most sensible and promising in the setting of modern life.

At the present time, Mr. Afanasyev is the head of the Parashakti Yoga School he established in Krasnodar, Russia. He conducts yoga classes and continues writing books and making translations of spiritual literature.

Historical background of the author of the Project Parashakti