The Symbol of the Parashakti Yoga School 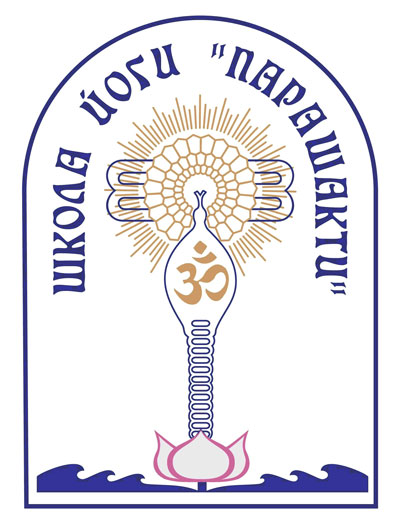 The school’s distinctive symbol is represented by a lotus flower encased in a Linga resting on a wave-covered water surface. A snake with the Sanskrit syllable for Aum on its hood makes its way upwards from the lotus flower into the sacred part of Linga.

Linga(m) (literally means “mark, attribute, sign of gender or sex”) is an ancient symbol of the male or father principle and the main symbol of Shiva which, according to the philosophy of yoga, represents Cosmic Consciousness in its impersonal aspect. It expresses the idea of the unity of the objectified reality of the outward world with the non-objective spiritual principle inherent in a person. The oval shape of the Linga signifies the beginning-less and endless essential existence outside of time and space. Shiva Purana, one of the main sacred scriptures of ancient Hindu traditions, considers shivalinga as space in which the universe is recreated and destroyed over and over again. It also symbolizes the creative principle of life, its constructive origin and the ultimate goal: the dissolution (laya) of the limited “mental consciousness” within Cosmic Consciousness, the unbounded supreme spiritual Truth. According to Sathya Sai Baba, the symbol, “most perfectly expresses the idea of omnipresence, omniscience and omnipotence” — attributes of God.

Wave-covered water surface symbolizes Sansara, i.e. the mortal plane that engages the soul of man. Indian folk wisdom goes, “Wherever you look, there is longing and lust, the frenzied thirst for pleasure, the precipitate flight from pain and death. Emptiness and feverous disruptive desires are everywhere. The world is full of changes and relationships. This is what Sansara is.” The spiritual transformation encouraged by yoga implies overcoming the fatal attachment to the material world with its magical appeal and illusory, short-term benefits.

The lotus flower symbolizes the Universal Pure Consciousness (Cit) that irradiates the whole of Creation with spiritual light, its every manifestation, thus allowing its perception. The lotus flower also signifies the spiritual development of man, the drawing out of his spiritual potential. As the lotus roots in the mud but its flower sprouts through water, comes to the surface and blooms above it, so does a man go from the darkness of spiritual ignorance, through the water of worldly illusion andstrain after the Light from above towards the revelation of the spirit and the attainment of Freedom. ‘One born of mud’, this is how poetically the Upanishads refer to the lotus. A brilliant Indian poet, Rabindranath Tagore, in his poem Yogi calls it,‘Fire Flower’.

Fortunately, the Russian phonetic pronunciation is fully capable of voicing striking tenderness and charm of that magnificent image.

The snake, as a sign, has a range of symbolic meanings in various religions and secret teachings. In this case, it symbolizes the spiritual energy of man known as the Kundalini-shakti (literally “the coiled power”). By awakening the Kundalini-shakti through yoga techniques, a man discovers the infinite possibilities of mental development and spiritual growth. This divine power is the highest manifestation of Consciousness in a man. If Shiva, according to yogic philosophy, represents the static aspect of Cosmic Consciousness, then the Kundalini-shakti is its dynamic aspect. Favored by a pristine life full of virtues and spiritual practice, this power awakens and manifests itself as the creative principle and it vouchsafes a man charisma and purifies his mind. It is a source of inspiration and enlightenment. Its route runs through the “psychoenergetic centers” of a man which correlate with different levels of Being (physical, astral and causal), and its ultimate “point” is Shiva — the omnipresent spiritual Reality. The convergence of the Kundalini-shakti and Shiva experienced as “the radiance of a thousand suns of incredible brightness” is what yoga is. At that moment, the Kundalini-shakti, shimmering and filling the yogi’s enlightened consciousness, blissfully starts its “performance” and reveals the great mystery of the world and life as Divine Sport. In Shiva Yoga, such perception is called “pure knowledge” (shuddha vidya), and, as it reunites with Shiva, the Kundalini-shakti acquires its supreme name — PARASHAKTI.

Оm (Aum) represents one of the most fundamental yogic and Vedic symbols and concepts. “I am Pranava (Om) in the Vedas...” says Lord Krishna in Chapter seven of the Bhagavad Gita explaining to Arjuna, His devotee, who He is. In Katha Upanishad, the child protagonist, Nachiketas, asks Yama, the God of Death, “Please tell me about That which is beyond virtue (Dharma) and vice (Adharma), which is beyond the created and the uncreated, which is beyond the three periods of time — past, present and future. Please tell me about that which you behold as the Truth”. At this Lord Yama explains, “That Supreme Abode which is praised by the Vedas, for attaining which one practices celibate (Brahmacharya) and various austerities, that Abode I will describe in brief: It is Ом. This letter (Ом) is indeed Brahman (Absolute). This is indeed imperishable. One who knows this letter, Om, attains whatever he desires. This is the best support. This is the highest support. Having understood this support, one attains glory in the region of Brahman” (I /2/:14-17). [Translated from original Sanskrit by Swami Jyotirmayananda]

Thus, Om is a mystic formula (mantra), the revelation of the supreme reality, of Brahman. It simultaneously expresses the name and the form of the Ultimate Truth. Om is called Pranava which means the transcendent state. In Sanskrit, Om is denoted by three letters: a, u, m. These letters symbolize the following:

The “A” aspect of Om refers to the physical body, the physical plane, and waking consciousness (jagrat). It also represents the Cosmic Being (virat) which includes all physical bodies. Our soul (jivatma) manifests itself via this state but it is not the same.

The “U” aspect of Om refers to the dream state (svapna), the astral body, and the cosmic totality of all astral bodies known as Hiranyagarbha. It is a subtle metaphysical manifestation of the Universe in the form of the Cosmic Power or Cosmic Mind. Our soul (jivatma) manifests itself via this state but it is not the same.

The “M” aspect of Om refers to the sleep state (sushupti), the causal body, and the cosmic causal body, Ishvara or God, which is the cosmic source of all, the first cause of all being. This state is beyond mind and intellect. This is the vast realm of the unconscious. Our soul (jivatma) manifests itself via this state but it is not the same.

There also exists another state — ultramundane. It is Silence, the result of three integrated states, their resolution. The integration of those three aspects or components a-u-m is what we call Pranava, i.e. the transcendent combination. The state bears the name of turiya and is communicated through a point (bindu). When Om is uttered, it is followed by a brief pause of silence. This transcendental aspect of Consciousness comprises the main part of the Om mantra, its essence, and is called ardha-matra.

Author of the Project